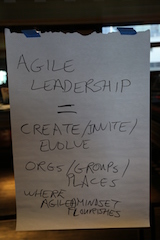 “Sometimes we get so caught up in what should be that we miss the beauty of what is.” – Doc Norton

At the 8th Annual  Agile Conference, held in Toronto, Ontario last week, the keynote speaker Doc Norton presented some insightful ideas on Host Leadership, about the roles people take when initiating, launching and facilitating new ideas. The basic premise of having a Host Leader mindset is to be fluid with the needs of the environment. While there is a time and place for authoritative decision-making, otherwise called gate-keeping in Host Leadership lingo, there is also a need for a humble approach to supporting an idea from conception to fruition without clinging to hard-and-fast expectations about what must happen.

In his example of applying these principles, he shared how his family decided to host a Euchre game to create an opportunity to meet new neighbours. When something different than expected emerged, he experienced the value detaching from “what he wanted it to be” and accepting “what was becoming.”

In brief, here are the 6 key aspects of Host Leadership.

Sometimes the Host Leader sets and reinforces rules, but sometimes they serve others. This depends on the moment and context.

Doc Norton laughed at his own story when he revealed that even though he and his wife put lengthy effort into creating “Euchre Night” he discovered that in the basement a large group of guests started playing poker. Rather than becoming disgruntled about the change, he adapted and became a co-participator. As a result of letting what was becoming just be, the neighbours found themselves carrying out Poker nights monthly for a decade.

Host Leadership is about creating space for great things to emerge and surrendering the inclination to control the outcome.

These six items are aspects of roles of everyone on a team and shouldn’t be thought of as one person per role per team. Instead, when people on a team ebb and flow around these roles the thought-processes and discoveries can be shared with the team, and the growth on the team supports the initiatives for team members.

What were his concluding words of wisdom to the audience?

He said, “Consider your leadership role at work. Regardless of your title, think about what you are initiating. How do you extend invitations? What space are you creating and maintaining? When are you gate-keeping? How are you connecting with others? How are you joining what is emerging even if it is different than what you expected?”

The take away from this inspiring opening address was the optimistic message that what is becoming may be better than anything anyone could have hoped for.